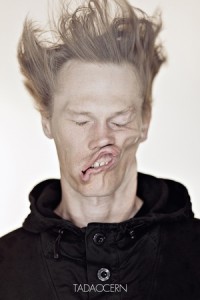 Why should it concern you?

When pulling a trailer behind a motorcycle, the trailer having a larger surface area will encounter more air molecules. The larger the surface area, the more resistance will be offered by the air and in turn offer more resistance towards the movement of the trailer. This is especially true for the space between the motorcycle and the trailer, where a lot of drag could form. A lot of energy will be expended trying to overcome this drag, energy in the form of gas and money.
Because wind resistance has a direct effect on the speeds at which an object can move through the atmosphere, this in turn, has a direct impact on the amount of time spent on the road. It can thus be scientifically proven that a motorcycle with a trailer behind will not be able to attain certain speeds within a given time period; contrasted to a motorcycle that does not have a trailer behind, which will be able to accelerate faster.

A motorcycle with a trailer behind will take a longer period on the road does directly imply that it will use more fuel to cover the same distance as compared to when it does not have a trailer. So you could say that because bike/trailer combo accelerates a little slower and cannot reach the same top speed, that the ride will be slightly longer.  (just a sec while I add this to the list of ways to ride more.)


When one put these measures in place, you will have increased fuel efficiency, increased speed, better stability on both the motorcycle and the trailer, and high performance. These changes are seen after a period of time when you check your monthly gas mileage and fuel consumption.


Ride safe and Get Lost,

Check out these Popular Posts: