Pull behind Motorcycle Trailers and Trikes

So: You have a trike…why would you need a trailer? 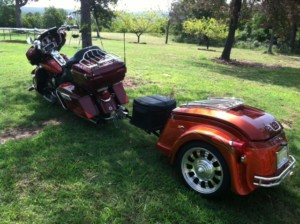 By design, it would seem that a trike would offer more storage space than a normal motorcycle. Depending on the trike in question, that may be true. However, the difference may not be as much as you think. For example, the Harley-Davidson Freewheeler, one of two trikes in the company’s 2017 lineup, offers a mere two cubic feet of cargo space. The larger and more luxurious Tri Glide Ultra offers more than three times as much at 6.8 cubic feet, but even that is not enough for many of us, especially if we have company and the trip will be more than a day or so in length.

So, you certainly can make the argument that trikes, like regular bikes, don’t allow you to bring enough stuff with you. Add to that the fact that a trike is already wider than a standard bike and drives more like a car – in that you don’t lean it into the turns – then pulling a trailer just seems like a natural extension of the trike’s design. If you’re going for comfort, ease of riding and general laid back travel, why not add the ability to take a lot of your stuff along with you? It just makes sense.

To a large extent, trikes – at least the kind with two wheels in the rear – are the choice of older riders and those with physical disabilities that make it difficult to ride a standard motorcycle. There seem to be a growing number of riders, however, who are choosing trikes because they are easier to ride, offer a bit more stability and provide at least some additional storage space.

Trikes are very different from two-wheeled-bikes when it comes to handling. Particularly turning and braking. For obvious reasons, trikes do not lean into turns. This tends to make riding a trike a bit more relaxed because you simply can’t make turns as quickly as you can on a standard motorcycle. Interestingly, we often hear that it is easier to teach someone to ride a trike if they have never ridden a standard motorcycle.

In some states, it is not necessary to have a motorcycle license to ride trikes. However, many states allow trikes to be used to pass the riding portion of the motorcycle license endorsement, so it seems the relationship between a trike and a standard motorcycle depends on where you live, at least from a legal point of view. 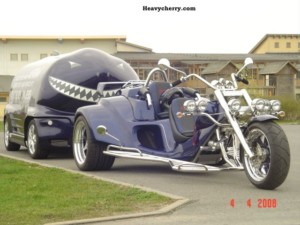 So far, only Harley-Davidson has taken up the mantel of producing trikes for the US market. There are many customizers who are more than happy to turn your Harley, Honda, Indian, Yamaha or pretty much any other bike into a trike – for a price.

For 2017, Harley offers two trikes: The Freewheeler (2 cu ft.) and the Tri Glide Ultra (6.8 cu ft.). The two models are quite similar, in that they share a drivetrain and many other components. The Freewheeler is marketed as a stripped-down trike with fewer luxury amenities and, accordingly, a lower price, which in this case is just over $26.000. The Freewheeler has a whopping two cubic feet of cargo space, so you’re not taking much more with you just because it’s a trike. 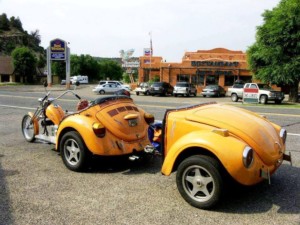 When it comes to the TriGlide Ultra, Harley talks almost exclusively about comfort, cargo and style. And, at more than $34,000 base price, all that style doesn’t come cheap. You get a ton of high-tech goodies and add-ons designed to keep both rider and passenger comfortable and entertained for the long haul. Cargo space? About 6.8 cubic feet, according to the website. 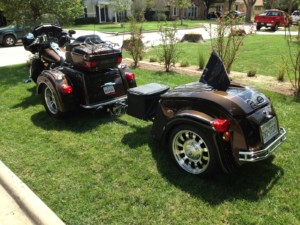 Despite the fact that the Goldwing is among the most popular bikes to convert to three wheels, Honda does not currently offer a factory trike. A couple of years ago, the Honda NeoWing, a tilting three-wheeler with two wheels up front, made news worldwide. But, while Honda continues to file patents for elements of the bike, and rumors abound that it is about to be added to their lineup, it has not yet been announced.

Take a trek on a trike

The truth is: Trikes have been around almost as long as motorcycles and there are good reasons for that. They are easier to ride, they’re more stable, they can hold more stuff and they retain the good looks, economy and general “cool” factor of a motorcycle. For long, lazy trips way out yonder, It’s tough to beat a high-end trike pulling a high-quality trailer. So get out there and take your stuff with you!